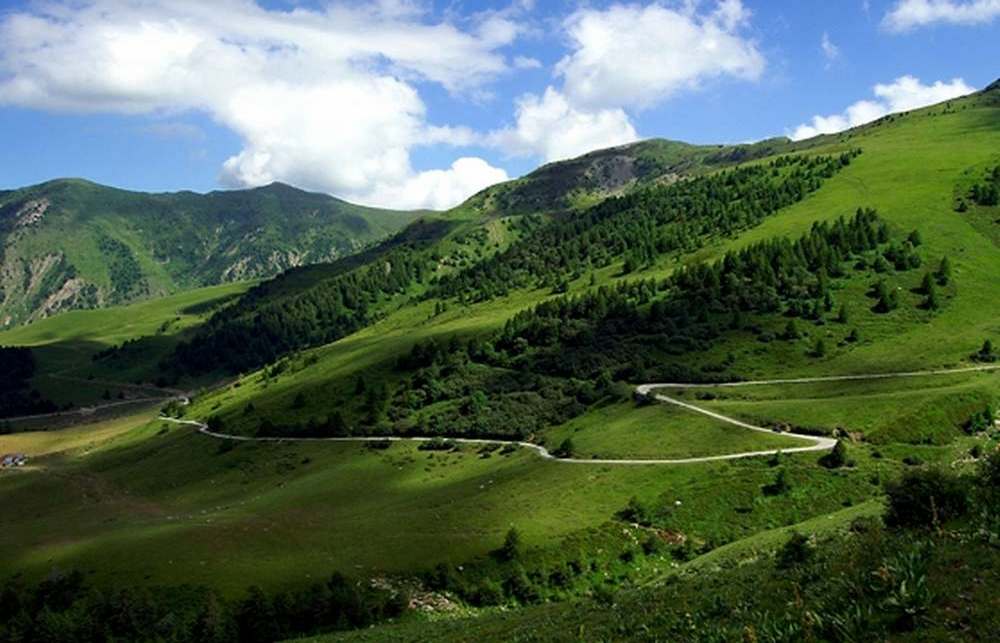 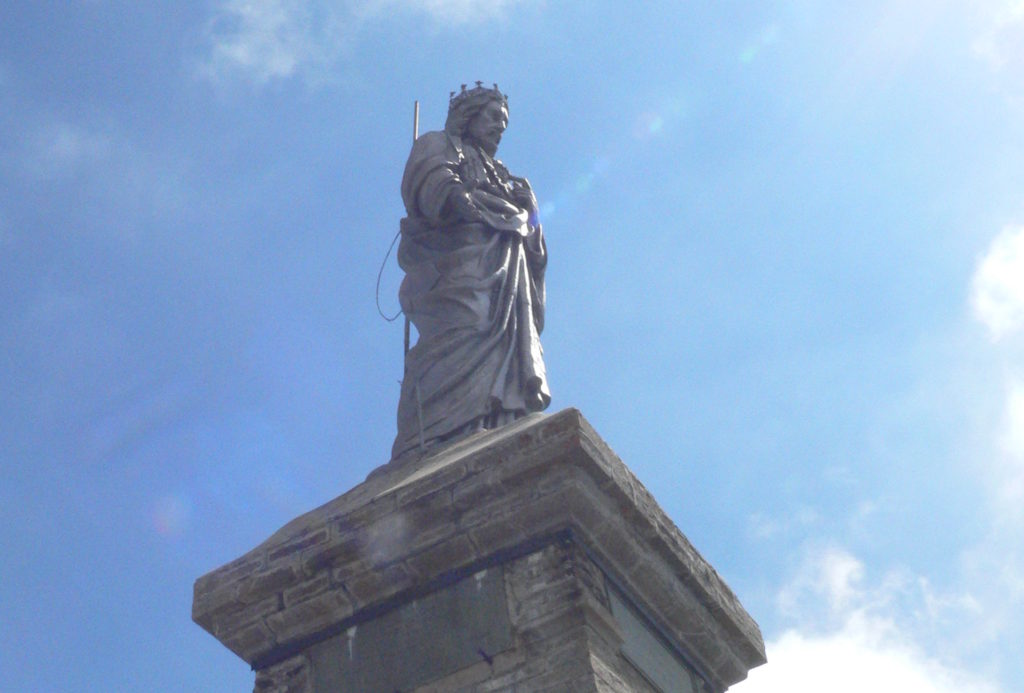 The Monte Saccarello (munte Sciacarée in brigasco, mont Saccarello in French) is a 2,201 m high mountain situated in the Ligurian Alps. With Monte Frontè (2,152 m), Cima Missun (2,356 m) and Monte Bertrand (2,482 m) it forms the Node of Monte Saccarello: an alpine massif, mainly made up of flyschoid calcareous substrata ( Sanremo Unit), which is characterized by relatively little harsh morphologies.

The Monte Saccarello peak has been an administrative border point between the provinces of Imperia and Cuneo since 1947 and a state border between Italy and France (Department of Maritime Alps). Its peak is the highest point of Liguria.

The Monte Saccarello peak can be reached by car and motorcycle from Monesi by a partially asphalted road, or by taking the ex-military road that connects the mountain to Colle di Tenda. This last one is scattered of numerous ruins of artillery batteries in anti-French function to protect the high Roia valley below. They were built at the beginning of the twentieth century and are now in a state of abandonment or reused as a shelter for animals in the summer. The peak can be reached on foot from Monesi and Realdo, or by walking along a part of the Alta Via dei Monti Liguri from San Bernardo di Mendatica or from Colla Melosa - Sella d'Agnaira.

On the top of the oriental front, at 2164 m above sea level, there is a large bronze statue representing Christ the Redeemer, part of a group of sculptures placed, in the early years of the twentieth century, on the highest mountains of every Italian region. The statue is in golden cast iron, placed on an artistic pedestal in worked stone, the Lord shows his heart to the whole valley as a sign of protection. One hundred years have passed since the first inauguration day, in the presence of bishops and prelates and several thousand people; yet the gathering is repeated every year with the participation of climbers, shepherds and tourists from all the valleys below and also from the coast. The monument was restored in 1980 by the Pro Saccarello Committee, after the daring discovery of a hand, detached by lightning and finished many kilometers away, in Santo Stefano Belbo, in the Langhe. It still presents itself in all its majesty and it is nice to be in its presence on the first Sunday of August, to spend a different day, surrounded by nature and closer to God.

The vegetation is typical of the high mountain landscape in the South-Western Alps, where secondary anthropogenic pastures and subalpine shrubs are interspersed with poorer formations on stony and discontinuous slopes and edges of primary alpine pasture (calciphilous formations that can be included in the Oxytropido-Elynion alliance), the latter strictly limited to the summit ridge (over 2000-2100 m).

The southern slopes of the mountain area are made up of flischoid rocks (flysch of the "Sanremo-Monte Saccarello" Unit) stratified and arranged in relief, consequently they are very steep and characterized by rocky walls, alternating with very steep detrital slopes, only partially consolidated and colonized by the arboreal vegetation (consisting of twisted larch specimens and at lower altitudes by Scots Pine, Beech and Mountain Maple).

On the northern slopes, the layers become a typical landslide arrangement and have suffered greater erosion which has favoured the formation of less inclined and steep slopes and the settlement of thicker and more continuous vegetation, characterized by subalpine larch forests and shrubs with red rhododendron (Rhododendron ferrugineum) or common blueberry (Vaccinium myrtillus) and cranberry (Vaccinium gaultherioides), mixed with green alder (Alnus viridis) in the more humid areas.

Among the most interesting flower species of Monte Saccarello we can surely mention the abundant flowering of the meleagride of Moggridge (Fritillaria tubiformis subsp. moggridgei), with its curved yellow bells dotted with burgundy. It is a plant subject to regional protection quite widespread on the northeastern side of Saccarello. Other plants of particular interest, typical of the alpine landscape, can be found at the southern limit of the area: the Doronicum macereti (Doronicum grandiflorum), the edelweiss (Leontopodium alpinum), the garlic serpentine (Allium victorialis) and the anemone of Monte Baldo (Anemone baldensis). Also the species linked to the alpine and Apennine culminating prairies are widespread, such as the alpine anemone (Pulsatilla alpina subsp. millefoliata), the narcissus flower anemone (Anemone narcissiflora) or the senecione capitato (Tephroseris integrifolia subsp. capitata) with showy yellow-orange flower heads.

There are also the exclusive endemisms of the Western Alps, such as the Ligurian gentian (Gentiana ligustica), the gentian of Villars (Gentiana burseri subsp. villarsii), the Swiss astragalus (Oxytropis helvetica), the elegant Allium narcissiflorum, the beautiful dusty primrose (Primula marginata), the violet of Cavillier (Viola calcarata subsp. cavillier (Viola calcarata subsp.) with large corollas of variable color from blue to white to yellow and the showy and very rare (just five locations around the world) centaury of Bicknell (Rhaponticum heleleniifolium subsp. bicknellii), abundantly present on the southern slopes of the massif, important also the presence of Androsace adfinis ssp. adfinis a small primulacea, with a relatively early flowering (end of May-mid June immediately after the snow melting), famous in Italy only for very few places in the south-western Alps and the Saccarello area has its only Ligurian stations.

On the slopes of the mountain you can find various species of mammals typical of the alpine environments including the white hare (Lepus timidus), the ermine (Mustela erminea), the marmot (Marmota marmota) and the chamois of the Alps (Rupicapra rupicapra).

Among the birds are common the golden eagle (Aquila chrysaetos), the buzzard (Buteo buteo), the kestrel (Falco tinnunculus) and the short-toed eagle (Circaëtus gallicus). Also present in the area are some species of eagle owl (Bubo bubo) and black grouse (Tetrao tetrix).

This tour directly crosses theHigh Argentina Valley and is particularly hard because it takes place at altitudes of over 1500 meters: that's why, given the high altitude touched by the route, we prefer to decentify those who are not familiar with the mountains, with the snow, with the sudden changes in weather that, especially on theAlta Via dei Monti Liguri(literally "High Route of the Ligurian Mountains"), can lead to problems of orientation - due to the rise of sudden fogs - and physical safety. Inviting therefore prudence without going beyond alarmism, thanks to the spectacular panorama that can be enjoyed from the watershed of Imperia, we strongly recommend this section of the Alta Via dei Monti Liguri that culminates on the highest peak of Liguria: Monte Saccarello (2201 m).

From the "roof" of the region the view is extended to three hundred and sixty degrees. To the south the infinite horizon of the sea opens up and the Verdeggia Valley stretches out at your feet: Verdeggia and Realdo (830 m) are the last guardian of the ancient Brigasca civilization.

To the north, the highest peaks of the Ligurian Alps rise, all in the province of Cuneo: Pizzo d’Ormea, Mongioie and Punta MarguareisThis particularly long itinerary - a 15 km long one - starts at the M. Grai refuge (1899 m) and follows the former military rolling stock to the north. Along the route to the Bassa di Sanson (1679 m), in the Ancienne Caserme locality, there is a direct track to the "Balcony of Marta"(2122 m) whose name includes the wide panorama that stretches over the underlying Roya valley and the Provence hills (the deviation between round trip and return implies 1 hour and a half more walking).

At Cima di Marta, walkways, stairways and military tunnels dating back to the thirties, once allowed access to the dizzying military emplacements equipped with gunboats that dominated the enemy from the top. Returning on one's own footsteps, through mainly grassland - at mountain avenues (Helictotrichon) - you will reach the Bassa di Sanson (1679 m), where there is an unguarded refuge in the municipality of Triora.

This point of the Alta Via dei Monti Liguri is also accessible to those who climb from Realdo (830 m) (see connection routes: Realdo-Bassa di Sanson), or from La Brigue (750 m), in Val Roya, 14 kilometers away.

From Bassa di Sanson, the only mountain pass that can be crossed by motorized vehicles, you can cross the western slopes of M. Collardente (1776 m), in French territory, up to the pass of the same name at an altitude of 1586 m, where the French and Austrian troops clashed in 1794.

Not far away, about one kilometer, along the SP. 76 that connects Colle Melosa with Mendatica, there is an ANA refuge. From the Passo di Collardente (1586 m) theAlta Via dei Monti Liguri climbs up the north-western slope of Monte Saccarello (2201 m) through a high mountain scenery, with larches, rhododendrons, junipers, prostrate forms of dwarf juniper, raspberry and blueberry bushes.

The route, from hairpin turn to hairpin turn, from shortcut to shortcut, initially follows the former military road and then abandon it in the final ascent to Monte Saccarello. Not far from the trigonometric peak, towards the east, stands the statue of the Redeemer - here a small chapel can offer a useful shelter in case of rain - was erected at the end of the nineteenth century together with nineteen other statues, some placed on the highest peaks of every Italian region.

Here converges also the GTA, the Grande Traversata delle Alpi(Great Crossing of the Alps), that by mountain ridge paths joins the Piedmontese alpine valleys with those of the Aosta Valley; in this regard we underline that in Carnino, on the hydrographic right of the Tanaro valley, a link road connects the Alta Via dei Monti Liguri with the GTA.

From the bronze statue, remaining on the ridge path highlighted by the "reddish-white-red" flag, you pass the Santa Maria peak (2138 m), the Valletta della Punta peak (2059 m) - where the Monesi ski lifts end.

This website uses cookies to improve your experience while you navigate through the website. Out of these cookies, the cookies that are categorized as necessary are stored on your browser as they are essential for the working of basic functionalities of the website. We also use third-party cookies that help us analyze and understand how you use this website. These cookies will be stored in your browser only with your consent. You also have the option to opt-out of these cookies. But opting out of some of these cookies may have an effect on your browsing experience.
Necessary Sempre attivato
Necessary cookies are absolutely essential for the website to function properly. This category only includes cookies that ensures basic functionalities and security features of the website. These cookies do not store any personal information.
Non-necessary
Any cookies that may not be particularly necessary for the website to function and is used specifically to collect user personal data via analytics, ads, other embedded contents are termed as non-necessary cookies. It is mandatory to procure user consent prior to running these cookies on your website.
ACCETTA E SALVA